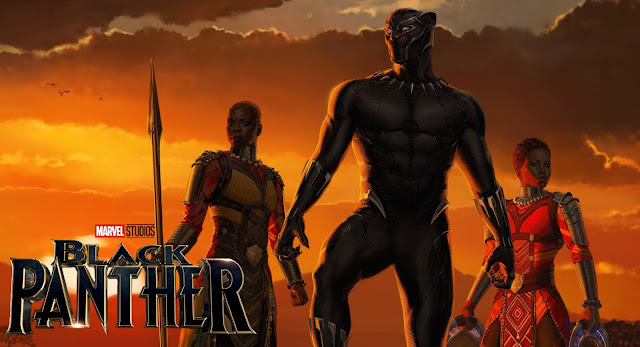 Thanks to CBM for the heads up.

"After the events of Captain America: Civil War, King T'Challa returns home to the reclusive, technologically advanced African nation of Wakanda to serve as his country's new leader. However, T'Challa soon finds that he is challenged for the throne from factions within his own country. When two foes conspire to destroy Wakanda, the hero known as Black Panther must team up with C.I.A. agent Everett K. Ross and members of the Dora Milaje, Wakandan special forces, to prevent Wakanda from being dragged into a world war." - Marvel

Big thanks to artist Ryan Meinerding!

Here's my @disneyd23 Black Panther poster giveaway art. This along with my #thorragnarok image was also used as a banner for the Marvel Studios Pavilion this weekend. Credit goes to @adigranov for the awesome Black Panther design and my amazing Vis Dev co-worker @anthony_francisco_art for Nakia and Okeye. Can't wait to see @chadwickboseman @lupitanyongo and @danaigurira in Ryan Coogler's finished product, it's been a super cool project to work on. #blackpanther #wakanda #chadwickboseman #lupitanyongo #danaigurira #marvel #marvelcinematicuniverse #instaart #d23expo #d23
A post shared by Ryan Meinerding (@ryan_meinerding_art) on Jul 16, 2017 at 3:07pm PDT