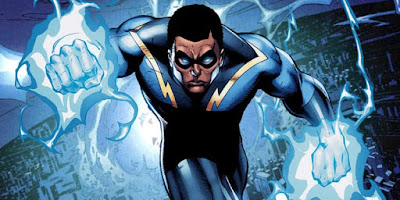 The CW will add to its TV superhero universe with DC's Black Lightning! (The series was originally announced as a Fox TV project.)

The new series is scheduled to begin production next month (March 2017).

Check out the Black Lightning character descriptions below, courtesy of That Hashtag Show and JoBlo.

Jefferson Pierce: Male, African-American, late 30s to 50. Handsome, fit, with an athletic build. Former 3-time gold medal decathlon winner who is now principal of a high school in South Central Los Angeles. A father figure to his student and hero to the local community. JEFFERSON is charming, charismatic, smart, and has both warmth and humor. He is devoted to his two daughters and remains deeply in love with his ex-wife LYNN. He also has a great passion for justice and a quick temper that he has spent years learning how to control. Think Idris Elba. LEAD.

Jennifer:  Female. African-American, LEGAL 18 to play 16. JEFFERSON’s younger daughter. JENNIFER is a scholar athlete; beautiful with a lean, athletic runner’s build. She is the entitled feminist of the Pierce family. Independent and outspoken with a wild streak. SERIES REGUALR, ASP.

Annisa: Female. African-American, to play 22. JEFFERSON’s elder daughter. Beautiful, quick-witted and intelligent; intense and passionate. ANISSA has a great respect for her father. ANISA balances the demands of medical school with her duties as a part time teacher at JEFFERSON’s school. SERIES REGULAR, ASP.

Lynn: Female, African-American, mid 30s to 50. Exudes confidence and intelligence. Beautiful, but not to be trifled with. Can exhibit both great emotional depth as well as a flirtatious, mischievous side. SERIES REGULAR, ASP.

"Black Lightning centers on Jefferson Pierce. He made his choice: He hung up the suit and his secret identity years ago, but with a daughter hellbent on justice and a star student being recruited by a local gang, he’ll be pulled back into the fight as the wanted vigilante and DC legend Black Lightning." - The CW
Black Lightning television