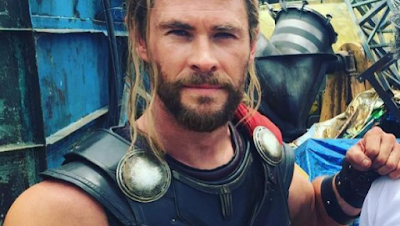 "Thor: Ragnarok will feature the return of Chris Hemsworth as the God of Thunder himself, with Tom Hiddleston as Loki, Mark Ruffalo as the Hulk, Idris Elba as Heimdall and Sir Anthony Hopkins again portraying Odin. Cate Blanchett plays the mysterious and powerful new villain Hela, Jeff Goldblum stars as the eccentric Grandmaster, Tessa Thompson will bring the classic hero Valkyrie to life on the big screen, and Karl Urban will add his might to the fray as Skurge. Also among the cast is Sam Neill, reuniting with Waititi, who directed him in his previous film Hunt for the Wilderpeople, and his Jurassic Park co-star Jeff Goldblum." - Marvel

Standing with those who are fighting to protect their sacred land and water. #nodapl #waterislife #mniwiconi @taikawaititi I would also like to take this opportunity to raise something that has been bothering me for sometime. Last New Year's Eve I was at a "Lone Ranger" themed party where some of us, myself included, wore the traditional dress of First Nations people. I was stupidly unaware of the offence this may have caused and the sensitivity around this issue. I sincerely and unreservedly apologise to all First Nations people for this thoughtless action. I now appreciate that there is a great need for a deeper understanding of the complex and extensive issues facing indigenous communities. I hope that in highlighting my own ignorance I can help in some small way.
A photo posted by Chris Hemsworth (@chrishemsworth) on Oct 27, 2016 at 6:49pm PDT