February 24, 2016
DC's Justice League is officially a go, and I have the photo to prove it!

Director Zack Snyder has dropped a pic showing himself and Jason Momoa in what appears to be a special effects workshop. Momoa will portray Aquaman in the two-part saga, with Part One targeted for a Nov. 17, 2017 opening and Part Two dropping June 14, 2019.


In the pic you can spot several interesting objects, including what appears to be a costume for The Flash on the left side. I've highlighted some Easter eggs in the pic below. 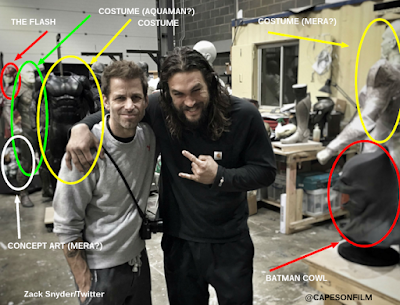 Thanks to Comics Alliance