The Night Guardian - A Superhero Short Film In The Works 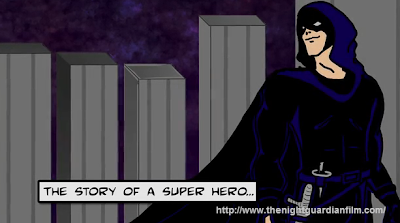 This film is Kyle's graduate thesis project at USC's School of Cinematic Arts, and it looks like a fresh take on the superhero genre.

Check out the synopsis  -

"The Night Guardian is an action--packed, dramatic, superhero short film by Brian Ott. On his deathbed Stanley Simmons reaches out to his estranged grandson Billy by telling him the story of the Night Guardian, a superhero on a mission to prevent criminal mastermind Carter Black from taking over the city. The Night Guardian is the same story Stanley once told Peter, Billy's father, whom he has not seen in over 25 years."

Kyle made the sizzle reel below, using clips from Tim Burton's Batman, Watchmen, and other movies in order to convey the look of The Night Guardian.

Was I right? Looks cool, doesn't it?

Kyle is oh-so-close to meeting his Kickstarter goal of $18,000, in order to make this film. If you're as intrigued as I am by this concept and want to help out, jump over to the Kickstarter page. You can find lots more info, including all the cool goodies you receive for your donation.

Kyle explains his inspiration for making The Night Guardian in his Kickstarter video below.

Let me know what you think, and if you hear of other superhero film projects, be sure to send them my way.