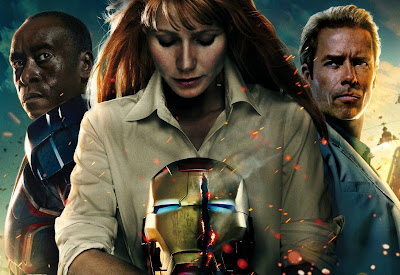 Ah yes, May 3 is just around the corner, so let's get up to speed on who's who in Iron Man 3. Fortunately,  Marvel released a set of cast photos and a brief bio for each, so now everybody can be a semi-expert on the flick.

Of course we all know about Tony, Pepper, and Rhodey, but the supporting players might not be as familiar to some. The latest Iron Man epic introduces several interesting, new faces to the Marvel Cinematic Universe. I wouldn't be surprised if a couple of these characters appear in other Marvel movies down the road.

For example, Stephanie Szostak's character - Ellen Brandt - has connections to Doctor Stephen Strange (at least in the comic books). Since we know there's a Doctor Strange movie in the works, maybe Brandt will pop up again. We'll see.

Check out the pics and let me know what you think.
"Brandt is a facially scarred Extremis soldier/assassin. A physically enhanced woman with deep-seated anger and a sadistic streak, Brandt enjoys using her exceptional strength to hurt and maim her enemies."

"Savin is Killian’s main henchman and the muscle behind the Extremis group. He is intimidating both in size and strength and is a stone-cold killer, willing to commit any act that Killian demands, no matter how heinous."

"Happy is the trusted bodyguard and chauffeur in charge of protecting Pepper Potts. More of a friend than an employee, Happy always has Tony’s back too, even when the eccentric billionaire doesn’t think he needs him. Steadfast and loyal, Happy would do anything to keep Pepper and Tony safe."

"Through his privately funded organization A.I.M., Aldrich Killian created a team to further research and develop the Extremis virus, which imparts unusual levels of strength and resiliency to human subjects."

"Mandarin is the sinister head of the terrorist organization known as The Ten Rings, from which all the acts of extreme terrorism plaguing the world appear to emanate. Although he is reclusive, Mandarin wields great power and makes his presence known by striking fear in the government and the populace through his brazen plans of attack."

"Beautiful Dr. Maya Hansen is a brilliant botanist whose work helped create the game-changing biological process called Extremis. Her discovery has the power to change the human body, but it could be very dangerous if misused."

"Pepper has progressed from Tony Stark’s assistant to the head of Stark Industries, pausing along the way to fall in love with Tony as well. Bright, loyal and honest, Pepper understands Tony Stark more than anyone and sometimes that can be both a worrisome and a dangerous thing."

"Rhodey is the Liaison between Stark Industries and the U.S. Air Force. He is one of Tony Stark’s few trusted friends and, most of the time, has the patience to deal with the impulsive genius. Rhodey has a new suit of War Machine armor in a red, silver and blue patriotic design. When suited up, Rhodey becomes Iron Patriot."

"Eccentric genius, billionaire, philanthropist Tony Stark is the armored super hero known as Iron Man. Decompressing from his heroic, near-self-sacrificial action as Iron Man that saved New York City from annihilation, Tony finds himself unable to sleep and plagued by worry and trepidation. When his world is destroyed and those closest to him threatened, Tony must find a way to save them—and in the process find himself again."