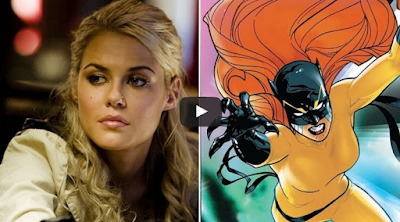 In the first season of Marvel's Jessica Jones we got several hints about how Rachael Taylor's character Trish Walker might take on a bigger heroic-type role. However, there was no mention of Trish's longtime Marvel Comics persona - the lethal Hellcat.

In a recent interview with CBR, Rachael offered some thoughts on Trish becoming a superhero alongside her best friend Jessica Jones. Marvel has announced there will be a Jessica Jones Season Two on Netflix, but the studio hasn't given a debut date.

Check out Rachael's comments below.


“I think Trish would really like to see Jessica use her gifts, her superhero powers, to a greater extent than what she probably does. I think Trish is very much an alpha personality type. I think she’s a very ambitious woman. And I think probably, if she had the same superhero powers that Jessica had, she thinks that she would probably do a lot more with them.”

“I mean, I try not to get ahead of myself and think about it too much, because it’s easy to get carried away and think about things. I already feel like I have more than my share, in a way, being on Netflix, being in the Marvel Universe, being in this show that has resonated so deeply with people. But of course, I mean, it would be amazing. I mean, it’s already a privilege to play a history that has so much lineage within the Marvel Universe. And to take it that one step further is something that, yeah, I’d love to get my teeth stuck into whatever happens to the character.”