How Much Do You Know About The Villain In 'Avengers: Age of Ultron'?

Okay, I know it's a long way off til 'Avengers: Age of Ultron' opens (May 1, 2015 to be exact), but it doesn't hurt to start preparing early. Of course, we all know the main characters will return, this time with help from Scarlet Witch and her brother Quicksilver. We also know Loki won't be around to play his diabolical mind-tricks and generally sow mischief at every turn. That means we have a new main villain, which happens to be one of the Marvel Universe's most awesome and powerful evildoers.

Yep, this time Ultron - that nearly indestructible, sentient robot - will throw down with Iron Man, Hulk Captain America, and Thor. But how much do we know at this point about the Avengers' next film adversary? Even though Joss Whedon hasn't even finished the screenplay, we know a few things about how the killer android will appear in the follow-up to 'The Avengers'. 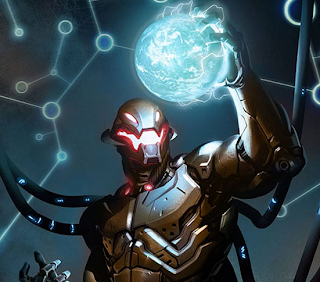 Wait, but that's not all!  I've scoured YouTube for some interesting videos that provide even more info on Ultron and the Marvel Cinematic Universe.

This first video is from shortly after San Diego Comic Con 2013. It reports on Joss Whedon's statements regarding the movie's deviations from the comic book lore.

This next video's not only a lot of fun, it gives a pretty solid history of Ultron's animated battles with The Avengers. It's well worth checking out.

Next up is a report on how one Avenger will have to do some homework on Ultron before the big movie starts filming early next year.

Finally, tell me what you think of this fan-made trailer for 'Avengers: Age of Ultron'?