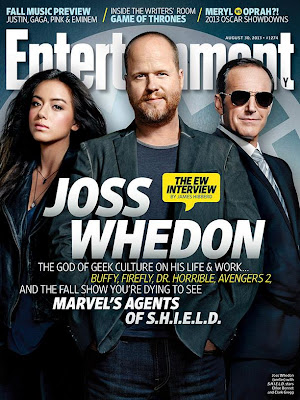 Joss Whedon gets the cover of the new issue of Entertainment Weekly, and the mag also devotes an in-depth, candid article on the writer/director. EW talks to the director of 'The Avengers' about his long career in Hollywood, how he got his start in the entertainment biz, and much more.

“This is basically a TV series of ‘The Zeppo’ [episode of Buffy], which was a very deliberate deconstruction of a Buffy episode in order to star the person who mattered the least,” Whedon says. “The people who are ignored are the people I’ve been writing as my heroes from day one. There’s a world of superheroes and superstars, they’re celebrities, and that’s a complicated world — particularly complicated for people who don’t have the superpowers, the disenfranchised. Now obviously there’s going to be hijinks and hilarity and sex and gadgets and all the things that made people buy the comics. But that’s what the show really is about to me, and that’s what Clark Gregg embodies: the Everyman.”

The sequel to 2012's massive hit 'The Avengers' is another topic that EW covers in the Whedon article. The mag posted a teaser of the interview online, and Whedon explained a bit about the villain in 'Avengers: Age of Ultron'. He talked about how the sentient robot, Ultron, has  been on his radar for some time and how he's adapting the character for the screen.

“I knew right away what I wanted to do with him,” Whedon says. “He’s always trying to destroy the Avengers, goddamn it, he’s got a bee in his bonnet. He’s not a happy guy, which means he’s an interesting guy. He’s got pain. And the way that manifests is not going to be standard robot stuff. So we’ll take away some of those powers because at some point everybody becomes magic, and I already have someone [a new character, Scarlet Witch] who’s a witch.”

Be sure to pick up a copy of Entertainment Weekly when it hits the stands on Friday, August 23.