Movie Review - The 5 Coolest Things About 'The Wolverine' 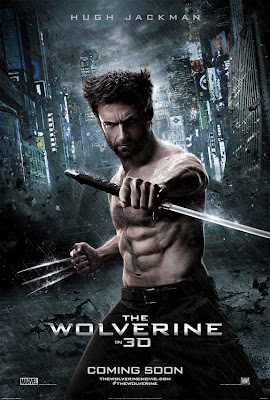 Let's talk about The Wolverine!

I'm sure you've seen it by now, so lemme know what you thought. How does it compare with the summer's other two big superhero movies - Iron Man 3 and Man of Steel?

I listed some stuff below that I thought was especially cool about The Wolverine. Have a look and let me know if you agree.


Top 5 Things I Liked About 'The Wolverine'

1. Hugh Jackman's performance - Jackman is the main reason The Wolverine will be remembered by many as one of the best superhero movies. His performance as the lonely, brooding Logan should be regarded in the same iconic way as Eastwood's Dirty Harry or Willis' John McCLane. I have a feeling I'll even appreciate Jackman's work in this movie more with each viewing. Oh, and Jackman should get a special award for his physical preparation for this movie. The dude got his 45 year old body into incredible shape for his sixth outing as Wolverine, and he's never looked more ripped or superhero-like.

2. The debut performances of Rila Fukushima and Tao Okamoto - Can you believe this movie was the first feature film performance for these two young women? Fukushima's 'Yukio' was one of the most interesting (and badass) characters I've seen in a superhero movie. Okamoto played Mariko like a veteran actor and really made me believe how Logan could instantly fall in love with her. And while I'm talking about the female members of the cast - a tip of the hat to Famke Janssen as Jean Grey, and Svetlana Khodchenkova as Viper. I thought they both were excellent - with Khodchenkova's Viper being one of the most menacingly portrayed female villains I can recall.

3. The Japanese locations - I loved how the director James Mangold shot a large part of the movie on location in Japan. Think about it - How many superhero movies are actually filmed on location? Most are shot on soundstages using green screen tech. The scenes at the Shinto temple and in downtown Tokyo added a lot of realism and helped me buy into the story more.

4. The direction of James Mangold - Kudos to Mangold for finally delivering a solo Wolverine movie that the character deserved. He promised that we'd see where Logan's rage comes from, and I think he succeeded. Mangold had a fairly complicated story to tell in just over 2 hours and he juggled a lot of plot threads while keeping the pace brisk.

5. The climactic fight scene - I've heard some people complain about the final battle between Wolverine, Viper, and Silver Samurai, but I loved it. I thought it was beautifully choreographed and the CGI work was excellent. (And I truly didn't see the twist coming.)

What's the final verdict? I thought The Wolverine more than held its own against this year's other superhero blockbusters. In fact, I'll go so far as to say it's one of the most intelligent, thoughtful, and daring movies in the genre's history.

Your turn. What did you think of The Wolverine?