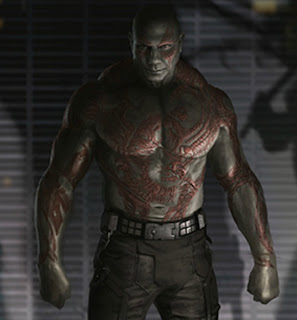 Hey guys, just wanted to share some cool Guardians of the Galaxy stuff from San Diego Comic-Con in case you missed it. So, you probably know that Marvel held a panel on Saturday (7-20-13) with the Guardians cast and director James Gunn. This was the first time the cast assembled in public, and they showed some early footage from the movie and had a Q and A session.

Marvel also unveiled its new title card for the movie, which you can take a gander at below.

Helen O'Hare of EmpireOnline was there, and she provides a great roundup of the festivities. After watching the 'Guardians' sizzle reel, Helen said the movie is looking as though it'll be a -

Helen also nabbed a quote from Marvel head honcho Kevin Feige, about the long process of making the Marvel movies.

"We try to plan years and years out; you know that we were here in 2006 talking about one day making The Avengers. One of the things we think about is how long can we make them interesting, but we want something unexpected, and that's what led us last year to Guardians of The Galaxy. We've literally just started filming in London, it's very early days; yesterday was day 13 or 14. They very much wanted to come here and say hi - so they did!" - Kevin Feige, Marvel Studios

According to reports, the footage showed the rag-tag team of space heroes in costume. As Feige mentioned, the movie's only been filming for 13 days in London, but apparently the fans at the Con saw several minutes of footage. By most accounts, the characters in the film closely resemble the concept art below, which was released just in time for the Con.

Shown in the image above (left to right)

For a better peek at the characters, I enlarged them a bit. Check 'em out.

During the Comic-Con panel, one of the cast members dropped a big surprise on the audience. Karen Gillan, who plays the villainous Nebula (kind of a space pirate), revealed that she shaved her head for the role! I really can't believe Gillan cut off that gorgeous auburn hair, but I guess that's true dedication to one's work.

Have a look at the pic below.


Karen Gillan before and after her #ComicCon Nebula wig trick. Whovians, calm yourselves (if you can). pic.twitter.com/6FotHEMAXy
— Empire Magazine (@empiremagazine) July 21, 2013

Finally, I rounded up a couple of videos that show the cast talking about what it's like being in the movie. First up is Benicio del Toro (The Collector) and Djimon Hounsou (Korath the Persuer).

Alright, I guess that's enough 'Guardians' news for one post, but I gotta say, I'm really looking forward to this movie. It sounds like something completely different from Marvel and I love the things I'm hearing about it.

What do you think of the Guardians of the Galaxy news from this year's Comic-Con?