Spider-Man, Captain America Get The Spotlight In The New Entertainment Weekly 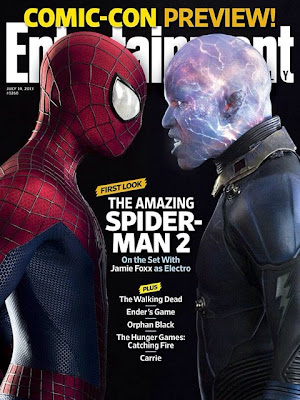 Entertainment Weekly is highlighting all the superhero happenings at San Diego Comic-Con International 2013, which kicks off on July 18. In the latest issue of the mag (on sale today July 12) a couple of highly-anticipated sequels get lots of coverage. As you can see from the pic above, The Amazing Spider-Man 2 graces the cover, with Electro (Jamie Foxx) staring down Spidey (Andrew Garfield). TASM2 is targeted for a May 2, 2014 opening. Jump over to EW for the full story on the cool cover.

Another movie covered in the new EW is Captain America: The Winter Soldier, which is set to hit screens on April 4, 2014. Take a look at concept art below that EW unveiled online this week, and read more about Cap's new movie at insidemovies.ew.com.

If you're not familiar with the Captain America comic book series that inspired the movie - the "Winter Soldier" battling Cap in the image above is his former friend, James "Bucky" Barnes. It looks like the movie will follow the comic story fairly closely, right down to Barnes' metallic, bionic arm.

Finally, EW also unveiled the poster (below) for the Marvel Studios short film - Marvel One Shot: Agent Carter, starring Hayley Atwell. Atwell portrays Peggy Carter, who was last seen in Captain America: The First Avenger. The film will debut at San Diego Comic-Con next week and will be included on the Iron Man 3 Blu-ray (on sale Sept. 24). Anthony Breznican of EW gives the full story on Agent Carter in this article.

Whaddya think of EW's coverage of these superhero movies? Are you planning to pick up the Iron Man 3 Blu-ray when it hits stores this fall?