The Amazing Spider-Man 2 - News From Comic-Con And More

July 26, 2013
Lots of Spidey news to share today! Of course I have some video from last week's San Diego Comic-Con, but that's not all. Several items about the The Amazing Spider-Man 2 hit the internets this week, so let's get to 'em.

First up is the panel from Comic-Con, which featured Andrew Garfield, Dane DeHaan, and Jamie Foxx, along with director Marc Webb (July 19).


Highlights Of The Comic-Con Panel

The panel (below) had some fun moments and it's worth skimming through if you're looking forward to TASM2.

If you want to read a more detailed breakdown of the proceedings, HitFix has a good write-up.

Here's Spidey making his entrance (via).

After the panel, Webb was asked how the sequel differs from the the first movie. He replied that the main thing he wanted to emphasize was how much fun being Spider-Man would be. He says that all the other movies haven't really shown what a "blast" Spider-Man is having. Check out Webb's remarks below.

We also got a peek at the cover of next month's Empire magazine, which features you-know-who. 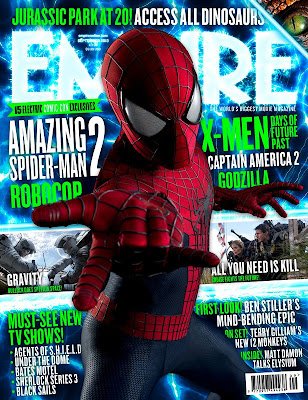 The pic below - showing Dane DeHaan, Andrew Garfield, and Jamie Foxx - is courtesy of The Amazing Spider-Man Facebook page. 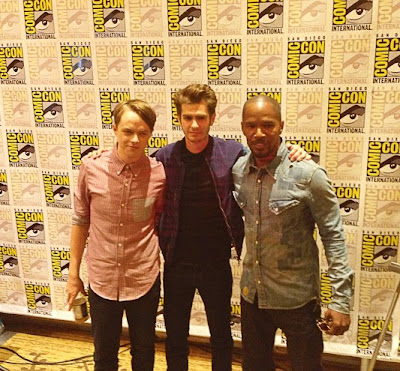 Finally, if you need even more Spidey news, Collider has ya covered. Watch the video below for an interview with Webb. It has new info on the future of the Spidey movie franchise. At the 2:12 mark, the director talks about how they came up with the idea for a trilogy at first, and then added a fourth film later.