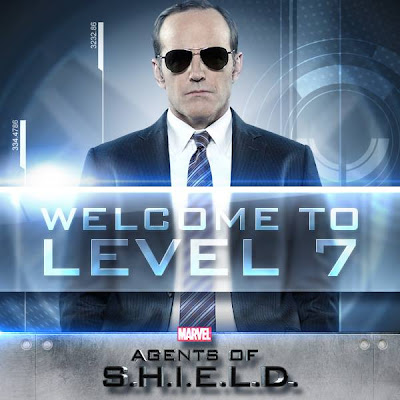 Day 2 of San Diego Comic-Con 2013 featured a panel with the stars of Marvel's upcoming TV series - Agents of S.H.I.E.L.D. - and the show's Twitter feed posted the pic below.

In the green room with cast and producers! pic.twitter.com/ozTIfAa4a0
— Agents of SHIELD (@AgentsofSHIELD) July 19, 2013

How Agent Coulson is alive and kicking after being (supposedly) killed by Loki in The Avengers film is one of the big mysteries surrounding the show. Series creator Joss Whedon is on record as saying they'll reveal how Coulson was "resurrected" gradually.

The lucky attendees at the Comic-Con panel were treated to the entire pilot episode. I hear that absolutely no video was shot by audience members, so we'll have to rely on word of mouth for now. Rebecca Keegan of the LA Times was there and described the pilot as revolving around "a young father with mysterious abilities" - played by J. August Richards. Keegan also said the pilot episode had "witty dialogue" and "sly winks at fan culture".

If the Tweets by those in the audience is any indication, it looks like Disney/Marvel and ABC TV have a winner.

The Marvel SHIELD pilot is fantastic. TV Tuesdays, comics Wednesdays - it's a good time to be a marvel fan
— Joe Henderson (@Henderson_Joe) July 19, 2013


Well I just watched the pilot for agents of shield, WOW it's amazing, best produced show I've ever seen, it won't disappoint
— Grace B. (@RocketGirl42) July 19, 2013

Could the day get any better for fans eagerly awaiting the Agents of  S.H.I.E.L.D. pilot episode on Sept. 24?

Entertainment Weekly reported that Cobie Smulders would reprise her role as Agent Maria Hill, who was last seen in Marvel's The Avengers. Until yesterday (7-19-13) no one knew if Smulders' character would be involved with the show, but now it's official. She'll appear in the pilot episode and have a recurring role in the series.

S.H.I.E.L.D. writer/director Joss Whedon told EW why he wanted Smulders on the series -

“I wanted very much to have Cobie in the pilot because as much as anyone else, she IS SHIELD. She’s cool and commanding, and has the dry humor that plays so well with Clark’s. Also, if she’s in it I get to hang out with Cobie.”