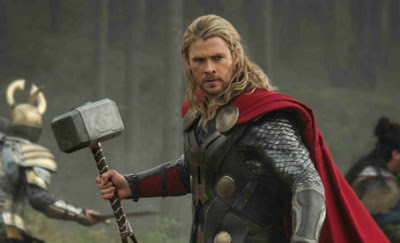 We still have a few months until we see Thor, The Warriors Three, and (of course) Loki, in Thor: The Dark World, but no worries. Marvel Studios has unveiled the official website for the movie, and it has plenty of stuff to check out. I like that Marvel's already loaded the site with a bunch of goodies, like high res pics suitable for Facebook and Twitter header images, and really cool GIFs and wallpapers. Oh yeah, and there's plenty of thunder and lightning.

"Marvel’s Thor: The Dark World continues the big-screen adventures of Thor, The Mighty Avenger, as he battles to save Earth and all The Nine Realms from a shadowy enemy that predates the universe itself. In the aftermath of Marvel’s Thor and Marvel’s The Avengers, Thor fights to restore order across the cosmos… but an ancient race led by the vengeful Malekith returns to plunge the universe back into darkness. Faced with an enemy that even Odin and Asgard cannot withstand, Thor must embark on his most perilous and personal journey yet, one that will reunite him with Jane Foster and force him to sacrifice everything to save us all."

Be sure to bookmark Thor's online home and check in periodically. I'm sure as the November 8 opening date draws closer, we'll be seeing lots more content added.

Bonus: Some pics from Thor: The Dark World surfaced recently via Empire magazine and SuperHeroHype, and I have one for you to check out below. It shows Christopher Eccleston as Malekith - King of The Dark Elves, holding what's described as a "dark matter energy gun". I didn't know magic-wielding elves needed guns, but I'm sure Marvel knows what they're doing. 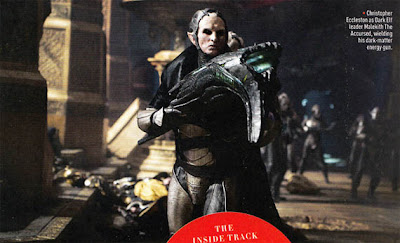 Let me know your thoughts on the new Thor site or anything having to do with the Thunder God's next big screen adventure.