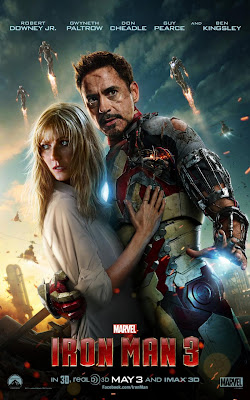 Alright guys, Iron Man 3's been in theaters in some parts of the world for a week, and here in the States it's been playing for just a day. If you're reading this blog, then I'm betting you're the type who's already seen it.

If you've seen it, did Iron Man 3 live up to your expectations?

Of course, I was among the first in line yesterday for an afternoon showing and I've spent a few hours getting my thoughts together about how I feel. This post isn't a proper review - it's just a few quick reactions that I wanted to get on the record.

On the chance you haven't seen it - don't worry, this is spoiler-free.


What I Liked About Iron Man 3

Okay, obviously I could on, but like I said this ain't a proper review. Those are just a few things that stuck with me after I left the movie. Maybe later I'll run down a few things that I thought weren't so cool about this latest Marvel epic.

What was your favorite part of Iron Man 3? Hit me up in the comments.

Want some more opinions about Iron Man 3? Check out these reviews:

Bonus: Here's a 90 second interview Don Cheadle talking to MTV about why that heavy ass Iron Patriot armor wasn't as fun as it looked.