Man of Steel Gets the Cover of Entertainment Weekly 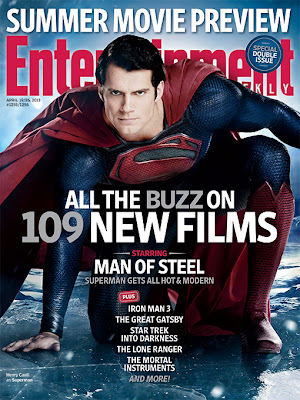 Check out this week's double-issue edition of Entertainment Weekly for the lowdown on all of this summer's big movies. Of course, there's none bigger than Superman's long-awaited reboot Man of Steel. Supes - as portrayed by Henry Cavill - graces the magazine's cover, bearing a determined stare and looking as if he's ready for takeoff.

The EW issue also includes some choice quotes from Man of Steel's creative team and cast, including director Zack Snyder, Cavill, and Amy Adams (Lois Lane). If you're curious about how this movie differs from previous cinema incarnations of Superman , be sure to read the EW article - This Week's Cover: Behind the soulful new 'Man of Steel'

Here's a sample from the EW article -


"Based on footage EW has seen, the film (which was directed by Zack Snyder and shepherded by Christopher Nolan) has plenty of building-smashing, train-slinging, heat-vision-blasting battles to cut through the emotional heaviness."

"Henry Cavill (Immortals), the latest star to wear the red cape, instead plays a Superman who isn’t fully comfortable with that god-like title. This film reveals that even on Krypton, young Kal-El was a special child, whose birth was cause for alarm on his home planet."

Circle Capes on Film on Google+