X-Men Days of Future Past - News You Might've Missed 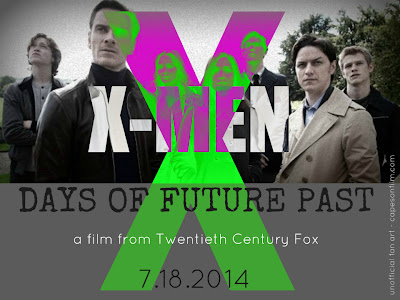 Ever have one of those days when you can't come up with a clever intro for your post about X-Men movie news? Okay, maybe that doesn't happen to you. Anyway, I really wanted to introduce this news from around the internets with a brilliant witticism, but I got nothin'. But hey, you came here for the news, so let's just get to it.


What's up with X-Men: Days of Future Past?

Director Bryan Singer is promoting his current movie Jack the Giant Slayer, but he's also talking about DOFP. In a recent interview, Singer mentioned how the movie is going to be "quite epic" and how "we're going to see things we haven't seen in other X-Men films." He also mentioned being able to "correct a few things", which I assume refers to the less-than-stellar X-Men: The Last Stand. DOFP is sounding more interesting every day. For more, check out the interview below.


Singer also welcomed Peter Dinklage to the cast of DOFP last week, and fans speculated that he'd be playing Wolverine's fellow Canadian superhero Puck. Singer seemed to shoot down that rumor in an interview with IGN. In the same interview, Singer talked a bit more about Dinklage's character -


“He’s not going to be a CGI character. He’ll be himself. Not that he’ll be playing Peter Dinklage, he’ll be playing this character. It’s not a shy character. He’s just such a phenomenal actor; I’m a huge fan of Peter’s and Game of Thrones. He was my first choice and I was really happy [about the casting]. It’s so funny to talk to him because he does that impeccable accent [on Game of Thrones] and then you talk to him and he’s this guy from New Jersey.” - via IGN

To sum it up, the cast is huge, and many of the stars from the first trilogy are returning for DOFP. Since I'm lazy, and since IGN can do a much better job of explaining the cast than I can, just watch the 60 second clip below.


As I write this, the rest of the cast is being filled out for DOFP, and Singer told IGN that he's negotiating with another actor, as well as some "younger" cast members. I wouldn't be surprised if we get the final cast additions within the next week. We already know that DOFP spans two timelines - 1973 and the present - so who these other characters could be is anyone's guess.

Finally, to whet fans' appetite for this latest installment in the X-Universe, Singer Tweeted the pics below. One shows Professor X's wheelchairs from the original X-trilogy and the other seems to show a movie set in the early stages of construction - no doubt, it's DOFP. Not the most exciting pics, I admit, but they show how close this flick is to kicking off production.

Have any other DOFP info or want to sound off on what Singer said in these interviews? Drop me a line in the comments or Tweet me.
X-Men:Days of Future Past