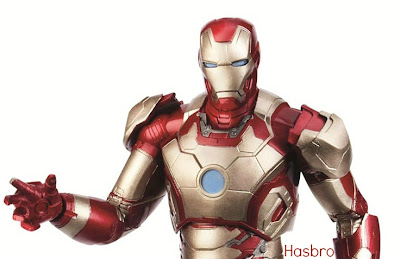 Who needs on-set spies to give you spoilers about upcoming movies when the toy companies do such a great job?

Each February, merchandise based on the upcoming superhero movies is showcased at the New York Toy Fair, and it's always loaded with spoilers. The 2013 edition of the Toy Fair kicked off on Feb. 9, and while yours truly couldn't make it in person, I've rounded up some highlights.

Of course, at events like the Toy Fair you don't learn specific plot details, but the toys often show costumes, vehicles, and other props that haven't been shown before in trailers.

Check out the pics below for a sample of what was on display in New York and hit the links for more deets.

This is the Iron Man 3 movie version of the Iron Man armor. It'll retail for about $15 and go on sale this spring.


You might also like Top Ten Toys Based on the Iron Man 3 Movie (This link takes you to a page with affiliate ads.)

We'll also see Iron Patriot in Iron Man 3. This is basically an upgraded and re-painted version of War Machine. It'll retail for about $15 and go on sale this spring.

Does this Iron Man 3 toy show a major spoiler from the movie? This is the "Starboost Armor", which Hasbro describes this way -


"This suit incorporates a powerful booster pack that allows Iron Man to achieve orbit in a matter of minutes."

This "Robot Attack" set appears to show one of General Zod's robot army that's been rumored to be in Man of Steel. So far, we haven't seen any robots in the trailers, but this toy is a big hint that Zod has help in his battle with Supes.

According to reports, there weren't a lot of toys based on Thor: The Dark World, but Hasbro did unveil the 3.75 inch line of action figures. No major spoilers here, but you do get a look at the God of Thunder's new threads. These "Thor" goodies will go on sale in fall 2013.

For more info on the Hasbro toys, check out the video below for MTV's report from the exhibit floor.


Circle Capes on Film on Google Plus