A Swamp Thing Movie is Closer Than You Think 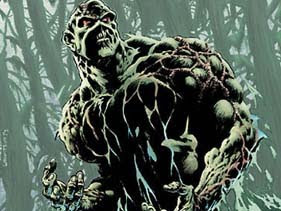 Swamp Thing is one of my favorite DC Comics characters, and for years now I've been following the developments regarding a movie based on him. A couple of months ago (Nov. 2012), I mentioned some rumors about director Guillermo del Toro and Warner Bros. having secret talks about finally bringing Swamp Thing and other supernatural characters from DC Comics together in a mega-budget film.

We finally got confirmation about those talks from del Toro himself via an interview he did with IGN today (Jan. 7). According to del Toro, the movie still has to get the greenlight from Warner Bros., but he also adds that he's picked the "perfect" screenwriter for the film. If you watch the interview below (it's about three minutes), you can't help but feel that this is a dream project for del Toro.

He says the working title of the film is  Dark Universe, and besides Swamp Thing, other characters appearing in the movie will be: Constantine, The Spectre, Deadman, and even the Jack Kirby creation, Etrigan the Demon.

I also found del Toro's comments about the upcoming Superman movie, Man of Steel, to be most interesting. He talks about how Warner Bros. is going with a more sophisticated, darker tone for all of it's superhero properties, and how Superman and Batman are the "pillars" of its movie universe.


"With Superman, they (Warner Bros.) feel very confident about what they have...they have two pillars, Batman and Superman, for the DC Universe. Tonally, they have a darker tone...a  more urban and sophisticated tone." - Guillermo del Toro to IGN

Are you as psyched as I am for Dark Universe to get off the ground?


Thanks to /Film for the heads up.

Get posts by email.