What's up with that Weird Poster for the Superman Movie - Man of Steel? 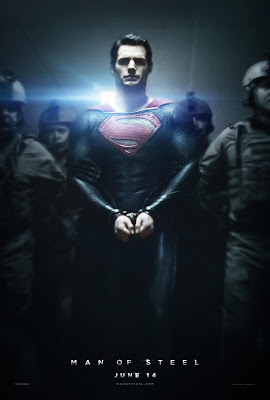 Kal-El in cuffs?!? What was the Warner Bros. marketing department thinking when it designed the first poster for Man of Steel? Don't get me wrong - I'm totally on board when it comes to director Zack Snyder's re-imagining of the Superman mythos for the 21st century. I want this movie to be totally different than any Superman flick that's been made before, and I liked the trailers that showed a weary, down-to-earth Supes. 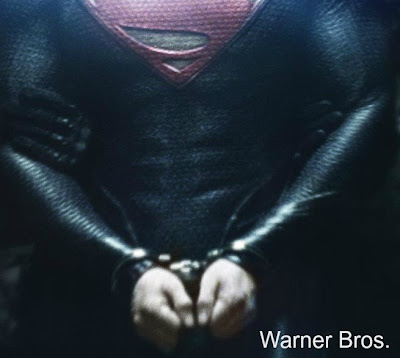 This poster, though...hmm. I've discussed this with some fellow fans, and we came to a consensus - This is an odd way to kick off the year-long run up to the movie's opening. Yeah, I was expecting something dark and serious, but handcuffs? Actually, when I first saw this poster it looked a little strange, but after having a day to think about it, I'm not so sure. Keep reading to see my final verdict on whether or not this poster is a fail, and what it might be telling us about Man of Steel.


FIVE THINGS I LEARNED FROM
THE MAN OF STEEL POSTER

Snyder has hinted in interviews that Superman won't have unlimited powers like his earlier screen incarnations, and I think that's the key point in this poster. Maybe the cuffs are a way to prepare the audience for a much more powered-down Supes than we're used to. 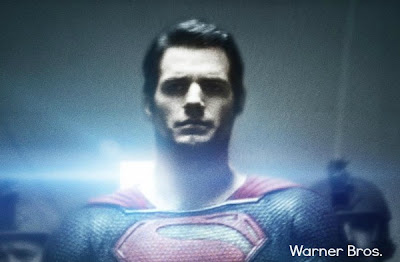 2.) Self-sacrifice is a key plot element.

Despite his powered-down state, we all know Supes could break out of those cuffs with no problem (yeah I know - unless they're made of Kryptonite). I'm guessing the poster is alluding to a scene in which Kal-El surrenders in order to prevent harm to anyone else. What are the chances that General Zod is somehow the cause of Supes' plight in the poster?

If you look closely at Cavill's face, he isn't looking upward in a show of pride or defiance. Instead, his eyes are looking straight ahead, as if he's resigned to meeting his fate (whatever that is). The look in Cavill's eyes conjures up thoughts of "Superman as the self-sacrificing savior" that so many people have written about over the last few decades.

4.) The government will play a sinister role in the plot.

I noticed that the soldiers in the poster are shadowy, menacing figures, while Superman is shown in full color with a ray of light over his shoulder. This contrast certainly isn't a random choice by Warner Bros. The studio is giving us a hint that Superman won't be welcomed with open arms by the powers that be in this cinematic universe. Maybe having a superhero in town would be a major threat to those who already wield the power.

5.) Man of Steel will be an intelligent re-telling of the Superman story.

Even though I question whether this poster was the wisest choice from a marketing standpoint, it does make one thing clear - the movie won't be mindless fluff. Of course, knowing that Christopher Nolan had a guiding hand in the production already told me that, but this image reinforces that thought. If the poster had shown a more sensational scene - one that we expected to see - I might think the movie was going for style over substance.

So, my overall reaction to this first Man of Steel poster is a thumbs up, even though the imagery is a tad too somber. I have no doubt as we go through 2013 the promotional material will get more uplifting and heroic.

What's your opinion of this poster? Is it what you expected, or were you surprised by the dark imagery? Let me know what you think in the comments or on your favorite social network.