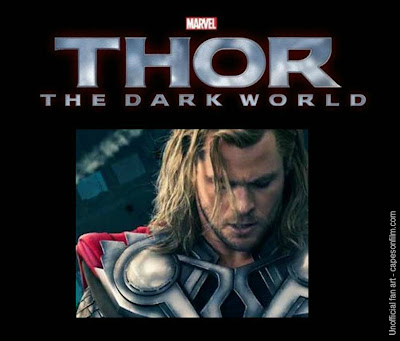 Marvel Studios is going full steam ahead on the second phase of the Marvel Cinematic Universe, and the next chapter in the multi-film saga can't come soon enough for me. The next two movies that will continue the story are Iron Man 3, which is entering the final stages of production, and Thor: The Dark World (TTDW), which still has a ways to go before filming concludes in England. We really haven't known much about the plot of TTDW, and the rumours have been flying as to what challenges Thor will face in his next outing.

Ahh, but now we have facts, as Marvel's parent company, Disney, recently gave us a morsel of info to chew on.


"...Thor fights to restore order across the cosmos..."

What's the key point to take from the synopsis? It's that Marvel will head to the stars in TTDW. That single phrase above tells us that TTDW will involve many other worlds besides Thor's home of Asgard. Let the speculation begin regarding which cosmic characters from Marvel's vast stable will have a role in Phase 2.

Check out the official synopsis below and hit me up on Facebook if you have any guesses as to what else the plot might hold.

Marvel's "Thor: The Dark World" continues the big-screen adventures of Thor, the Mighty Avenger, as he battles to save Earth and all the Nine Realms from a shadowy enemy that predates the universe itself. In the aftermath of Marvel's "Thor" and "Marvel's The Avengers," Thor fights to restore order across the cosmos...but an ancient race led by the vengeful Malekith returns to plunge the universe back into darkness. Faced with an enemy that even Odin and Asgard cannot withstand, Thor must embark on his most perilous and personal journey yet, one that will reunite him with Jane Foster and force him to sacrifice everything to save us all.

Thanks to Blastr for the heads up.