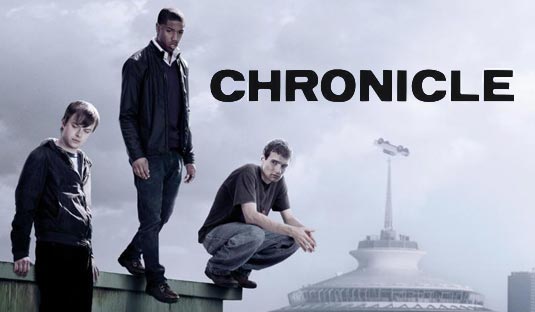 First of all, Chronicle is a tough movie to categorize. I'm not sure how to describe it in one word - drama? suspense? action? It has some of each of those elements, but it doesn't fit neatly into one genre. However, let's clear up one thing about what this movie is and is not. It is a film about people with superhuman powers, but it's not exactly a "superhero" movie, as we've come to know that term. Yes, people in the movie can crush cars like they were toys and fly just like in comic books, but there are no uniforms or costumes, or villains out to rule the world. Hell, there's not even a super-secret lair anywhere to be seen. Instead, director, Josh Trank, threw out a lot of those superhero cliches and tried to make a serious, realistic film about ordinary people dealing with strange, new abilities. 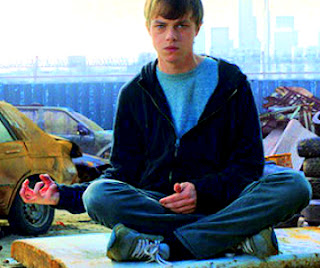 Instead of the costumed heroes and villains that we've come to expect in conventional superhero movies, here we have three average high school students who accidentally gain extraordinary powers - and spandex or masks never enter their minds. Come to think of it, we might have to invent a new sub-genre in order to classify Chronicle - maybe calling it a "metahuman" movie is more accurate. If you're not familiar with the term, metahuman - it's being used in both popular fiction and comic books to describe any individual with capabilities that go far beyond normal human limits. In other words, metahumans can perform superhero-like acts, but no mask, alter-egos, or skin-tight costumes are needed. That difference is what sets Chronicle apart from every other mainstream "superhero" movie that's come before it. In fact, the movie seems to exist in a world where superhero comics or movies don't even exist. If I recall correctly, the characters don't even utter the word "superhero" or compare their powers to any comic book character throughout the entire film.

I hope that gives you an idea of what to expect if you see Chronicle. I'll put it this way, think Stephen King's Carrie more than Stan Lee's X-Men, and you'll be on the right track. Now, on to the review. Was the movie any good? Yes, it has a lot of things to recommend it, starting with a great young cast of new actors that I'm sure we will be hearing more of soon. The standout is Dane DeHaan, who plays the smart, but socially awkward Andrew Detmer. Also making good impressions are Michael B. Jordan and Alex Russell, who play Andrew's friends, Matt and Steve, respectively. To briefly sum up the plot - Andrew, Matt, and Steve find a strange, glowing object in the woods, and it somehow knocks them unconscious. On awakening, they discover they have the power of telekinesis (moving objects with the mind) among other superhuman abilities. The movie then explores what three ordinary teenagers would do with this power and how their psychological make-up would determine if they used it for good or evil. Without giving away too much - one of them has a troubled past that greatly influences how he thinks these powers should be used.

If you've seen the trailer for Chronicle, you know that it's filmed in the "found footage" style that's popular among filmmakers these days. That style of filming is one of the things that sets this movie apart from the mega budget superhero movies, but at the same time it can be a major turn-off for some people. There are scenes in which the camera jumps around so much, that if you get seasick easily, you might be running for the nearest bathroom at times. In the film, Andrew is obsessed with "chronicling" his life on camera, and so much of the movie is seen from his perspective. Kudos to Trank for devising some clever ways to keep Andrew's camera and others (such as a hospital security camera) recording the action at all times. For the most part, I thought the camerawork was very well done, but I've heard many people complain that this type of movie is a played out gimmick. By the way, in case you're wondering why the "found footage" style is so popular these days - I'm sure it's partly for artistic reasons, but truth be told, it's an incredibly inexpensive way to make a feature film, when compared to traditional techniques. Get ready for many more movies like this in the future.

I've waited a few days to write this review in order to give Chronicle a chance to sink and let me ponder how it compares to other superhero films. Overall, I was impressed with the smart, true-to-life dialogue and how the movie realistically portrayed three guys dealing with newly-gained superpowers. Trank effectively showed their gradual progression from clumsy, irresponsible beginners to having complete control over their powers and trying to use them wisely. At first the trio want to have a little fun at the expense of their classmates, but eventually they have to make profound moral choices as to how they're going to wield their powers - and that's really the heart of the movie.

Another highpoint for me was the skillful use of visual effects that showed cars and buildings being destroyed, the characters flying a la Superman, and a climactic super-powered fight scene in which a city is nearly decimated. In fact, the effects in this movie (with a $15 million budget) were better than those in many big budget movies like Fantastic Four (2005), which cost about about ten times more to make. However, the movie was far from perfect. I believe the biggest flaw in Chronicle was that it lacked a character that the audience could root for. Trank and company tried so hard to make it different than mainstream superhero movies, that they left out one of the things that makes those films so popular - a hero. In Chronicle, there just wasn't a character that I really cared about and could identify with. So, in the end, this is an impressive debut for Trank and a thought-provoking film that deserves to be ranked higher than many of the big-budget superhero movies. The absence of a truly likable, compelling main character was a weak point, but overall, Chronicle will please fans looking for a fresh take on superheroes. I'm just afraid others might leave the theater a bit disappointed.

Have you already seen Chronicle? Do you think it was great, good, or just meh? Let's hear it in the comments!