'Chronicle' - New Movie Has Super Powers, but No Capes 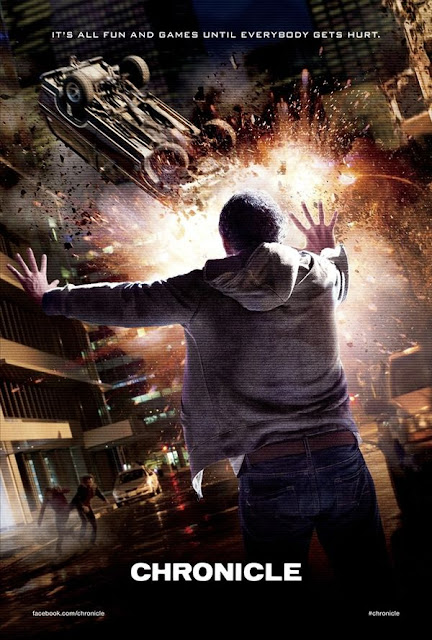 Okay I admit it, sometimes I really wish I had a super power. Most of the time, I wish for X-ray vision, but I don't want to digress too much, so I'll  save that topic for another time. Anyway, if I had some type of super power, I hope I act a little better than the characters in the new movie, Chronicle.

Last week, I mentioned Chronicle because its director, Josh Trank is close to being given the reins of the huge Fantastic Four re-boot. So all of a sudden, Chronicle is generating a lot of buzz because Trank is about to get the FF job. What's Chronicle about? First of all, it's filmed in the "found footage" style, like The Blair Witch Project and Cloverfield. One of the main characters is recording everything that happens on his phone camera. It's also in the genre of other "realistic" superhero movies and TV shows like Heroes and Hancock. You know, the type of shows that try to portray how people with superhuman abilities would really act.

Chronicle is the story of three high school students who develop super powers after they go wandering inside a weird crater of some sort that they find in the woods. Let's just say, when they discover they have a power, they don't follow Peter Parker's do-gooder example. I've collected all of the preview clips and the official trailer below, so you can decide if it's worthy of all the pre-release hype. Personally, I think it looks pretty cool. Who hasn't wondered what it would feel like to have a superpower and what they would use it for? The way these characters abuse their power in the clips has me thinking about what separates a superhero from a supervillain. Hmm, food for thought. How about it? Are you planning to see Chronicle when it opens, or is it a "wait for Netflix" type of movie?

Chronicle stars Michael B. Jordan, Dane Dehaan, and Alex Russell.
It opens in the USA on February 3.