Wanna Know the Surprise Villain in 'The Avengers'?

We all know Thor's seriously disturbed and vengeful brother, Loki, is the main villain in Marvel's The Avengers - but will he have help wreaking destruction on the world? According to an article on Heat Vision, he just might. Seems a previously seen baddie from another Marvel movie is going to raise his ugly mug again in the battle against Hulk, Iron Man, Captain America, and Thor.

As often happens with superhero movies, the merchandisers start promoting their products and inadvertently giving away spoilers long before the movie opens, and that's the case here. It looks like a toy company has released a promo that shows the (up until now) surprise villain in The Avengers.

If the report is accurate, this is a big spoiler, but if you can't stand the suspense, check the rest of the post after the jump. 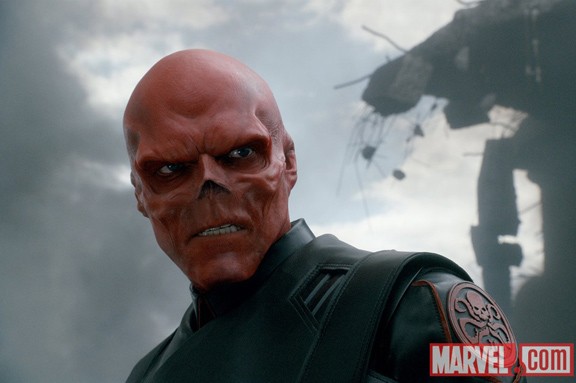 Yes, it's none other than the Red Skull (played by Hugo Weaving), who was last seen in Captain America: The First Avenger and who seemed to die at the end...but did he? Personally, I think the teaming up of these two super-villains would be a brilliant plot twist because they both have revenge on the mind and could only hope to defeat the assembled Avengers if they work together. What about this possible team up? Will it help make The Avengers the biggest and coolest movie of 2012?