Today, I thought I'd take a brief look at the 2011 film, Super. This is not intended to be a comprehensive analysis or a breakdown of the film, instead, I'm going to give my overall reaction to it and point out a couple of things I found interesting. Hopefully, if you've seen the movie, this article will launch a discussion in the comments section about the film's merits, or lack there of.

Update: The LA Times blog, Hero Complex, posted an article on May 21, 2012 in which James Gunn and Rainn Wilson discuss Super. Gunn and Wilson agree that the mixed tone of the movie (dark comedy/drama/violence) was one of the factors leading to its poor showing at the theater. Read the article here --> http://herocomplex.latimes.com/2012/05/21/rainn-wilson-why-super-struggled-to-find-an-audience/#/0 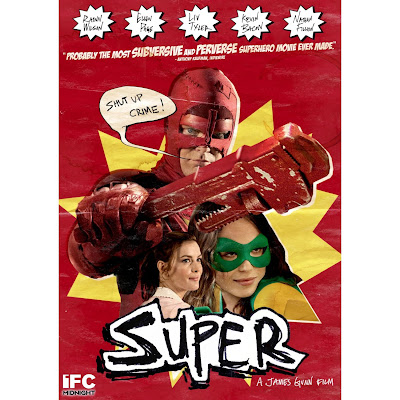 I feel sorry for James Gunn, the writer and director of Super. He probably conceived the idea for a weird, twisted, violent take on the superhero genre many years before finally releasing his movie in the spring of 2011. Unfortunately for him, exactly one year earlier, someone else released a weird, twisted, violent take on superheroes - that, of course, being Kick Ass. If Gunn had released Super, let's say, three years earlier, it might have gotten much more notice, but let's face it, the exact same audience Super was aimed at had already seen Kick Ass. So, Super had a major hurdle to get over right from the start - trying to convince people it wasn't a Kick Ass re-tread. I won't go into the similarities between the two movies here, because it would take too long and deserves a separate post.

If you haven't gotten around to seeing the movie yet, here's a brief synopsis-

Super is the story of Frank D'Arbo (Rainn Wilson), who loses his wife to a sleazy drug dealer, and decides to win her back by becoming a superhero. He cobbles together a costume, fashions a weapon out of a huge pipe wrench, and reluctantly takes on a young female sidekick. The mayhem and violence grows more and more extreme as Frank will stop at nothing to rescue his wife from the evil-doers.

Whenever I review a movie, I always like to start by pointing out some of the positive aspects before I go into the things I had a problem with. First - the cast - James Gunn must be either very persuasive or likable, or both, because Super boasts a cast that many films with ten times the budget would love to have. Besides Rainn Wilson in the starring role of Frank D'Arbo, it has Ellen Page as the sidekick, fresh off her performance in Inception, Kevin Bacon as the drug dealer, and Nathan Fillion, who plays a TV superhero called The Holy Avenger.

Another highlight (and frankly, my favorite part of the movie) is the opening title sequence - a funny, high energy, animated clip from a studio called PUNY, which also does work on the Yo Gabba Gabba! children's show. Check out the clip below -

Because it sounded like a crazy, fresh take on the superhero genre, I really wanted to like Super. I respect what Gunn was trying to do with the film. He was trying to get us to look at superheroes in a new way, by twisting some of the tropes of the genre. For example, showing what would really happen if an average Joe decided to don a costume and start bashing bad guys with a wrench. However, there were several things about the movie that I found so distracting and poorly thought out, that it prevents me from highly recommending it to anyone who does not have an interest in the superhero genre.

Right off the bat, a major plot point made no sense and had me shaking my head. Frank, the wannabe superhero, is supposedly a nerdy guy who watches a lot of cartoons and even a superhero show called The Holy Avenger. It's reasonable to think Frank would be knowledgeable about comic book heroes, but when he goes to a comic book shop for advice, the clerk (Page) has to explain to him who Batman and Iron Man are. That scene soured me on the film, because it seemed like there was no attempt to make Frank's learning process believable. There were other weak spots in the script like the previous example - Why would an adorable, young woman (Page's comic shop clerk) be instantly attracted to an obviously disturbed thirty-ish loser who wanders into her shop? Part of the problem might've been in the casting. Honestly, I might've found it more believable had Gunn cast an actress who was not quite as beautiful as Page in the role. Let's face it, if a big, goofy nerd walks into a shop and Ellen Page falls for him, the nerd's missing wife would be nothing more than a distant memory.

Another sticking point with me was Frank's unbalanced mental state, which caused him to become The Crimson Bolt (his superhero moniker). Just some of Frank's mental health issues include - terrible self-esteem, a complete dependence on his wife's affection for his happiness, uncontrollable anger, delusions, and  most likely, schizophrenia. I'm not saying that mental disorders can't be compelling character traits, but instead of rooting for Frank to reach his goal of saving his wife, I just wanted him to seek therapy. In other words, there was no one in the film for whom I could feel any empathy, least of all Frank.

Another element that Gunn included that seemed unnecessary was a running gag about an ultra-conservative religious TV program called The Holy Avenger. Nathan Fillion plays the Avenger, and his main purpose seems to be preventing teens from having pre-marital sex and other sins of the flesh. Frank watches the show and is somehow inspired by it, but except for one scene in which he prays for help, we don't see much evidence that Frank is a highly religious sort. The Holy Avenger segments were meant to offer some comic relief, but they came across to me as just Gunn's way of including a not-very-funny anti-Christian joke into a movie that really had very little to with religion otherwise.

Despite Super's weak spots, and some gruesome scenes that require a strong stomach, I would recommend it to anyone who is interested in the superhero genre. Even though I didn't find the experience especially enjoyable, there were enough interesting elements to make it worthy of any discussion of superhero-inspired films. For example, Gunn's use of extreme violence throughout the movie could raise questions about how comic book-style violence is portrayed in mainstream superhero movies. His decision to make Frank's sidekick an innocent-looking young woman with a violent, sadistic side, might be disturbing, but maybe it says something about the lack of realism, or lack of strong female characters in the big-budget cape movies. Final thought - When the history of superhero movies is written many years from now, Super will definitely earn a spot as one of the strangest examples of the genre ever made.
Ellen Page Rainn Wilson Super superhero movies superheroes