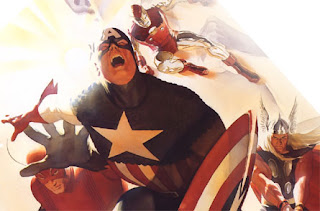 It's been too long since I paused for a few minutes to ponder some of the larger issues regarding the superhero film genre. The last few weeks, I've just posted a news item here or there, and while I don't believe there's anything wrong that, there's certainly room for more.


The history of cape movies can be a wonderful starting point for discussions beyond what actor should play what role or whose costume didn't look like the one in the book. To what other issues am I referring?


Okay- one "big picture" topic that bears discussing is this: How far, or to what level of quality, can superhero movies advance in terms of story-telling, cinematic artistry and overall quality?


What am I talking about?


I'll try my best to explain. - One of the most fascinating developments of recent years is the way in which superhero movies have entered what one could call a "post-ironic" era. The current Batman incarnation and Watchmen are prime examples of this phenomena. These films presented the heroes with all the trappings of their comic book roots, but with nary a snicker or lame joke about long underwear. With these films, the makers said "Here's the character. He wears a costume and does extraordinary things. Now, get over it and let's get on with the story." Instead of trying to pander to the non-super aficionado with juvenile humor, the films got their power from literate screenplays and stellar acting, among other attributes.


So, what do I draw from these recent cape movies that try to appeal to the intellect while not losing any of their entertainment value?


Simply put, I think we're witnessing the rapid evolution of a genre- one that filmmakers have only begun to explore. The sheer number of creative options that the genre presents to intelligent filmmakers is mind boggling. If the present rate of improvement continues, I see a day in the near future in which some cape movies will be ranked with films that are regarded as the greatest ever made. For example, I see a day when we'll have a Superman trilogy that will rival anything George Lucas ever imagined in Star Wars.
This next statement might sound crazy, but I think one day, (as the post title suggests) some as yet unknown director will make the Citizen Kane (1941) or The Godfather (1972) of superhero movies. Far fetched, I know, but I wonder how many thought, back in '41, that a movie about a newspaper mogul's childhood psychoses would make for a classic film? On a side note, I haven't mentioned the new generation of 3-D technology that might transform the genre in ways we haven't even considered.


So, there's my take on the current state of the genre as of November 24, 2009. I can sum it up like this: If you think The Dark Knight is the pinnacle of capes in the cinema, you ain't seen nuthin yet.
Image: The Avengers, copyright Marvel Comics- painting by Alex Ross
Batman Citizen Kane George Lucas Godfather Watchmen