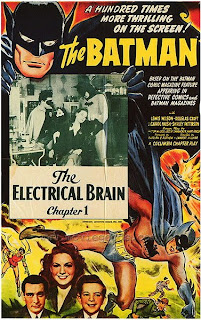 I finally got my copy of Batman(1943), in the mail this week. This is the fifteen chapter serial from Columbia that's been totally dismissed as garbage by many critics. This afternoon, I popped it in and watched Episode One: "The Electrical Brain". My first impression is that critics have been unfair to this movie over the years.

Yes, the low budget sets and costumes look silly to modern audiences, but it's a priceless example of how quickly superheroes were absorbed into pop culture. What struck me is that many of the images and iconography that we would see in every subsequent Batman movie are here for the first time.
If you're the least bit interested in the evolution of superheroes in general, and especially in film, it's required viewing. I'm just sorry it took until 2009 for me to get my hands on a copy.
Image: Batman poster- Columbia Pictures, Batman copyright DC Comics
Batman Batman serial Serials