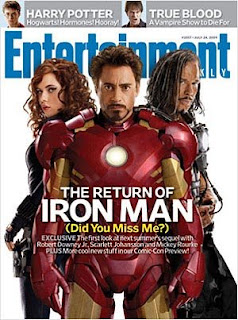 Photos of Robert Downey Jr., Scarlett Johansson and Mickey Rourke have been trickling out of the Iron Man 2 (2010) set for months. Those have been okay, but not great. Finally, some more detailed shots of the stars in costume are coming out. If you're like me and get enough of these teasers, then be on the lookout for the next issue of EW. It'll feature this very cool cover shot of the three stars, along with more pics and details on the production so far.
I've said it before, but there's not much for fans to complain about regarding IM 2 news, so far. I've been reading some of the interviews these three have given, and it sounds like they're revved up to make sure this sequel rocks even harder than IM did.